My friend just likes vaccinating. He was the first vaccinated against COVID-19 among my pier group. He’s also vaccinated against tuberculosis, flue (annually), measles, and some other esoteric things that I’ve never even heard of. And he can’t understand why I don’t do the same. In fact, why every intelligent human being doesn’t do the same. “The more anti-vaccinators — the less anti-vaccinators” he likes to say.


And that makes sense. Majority of vaccines are scientifically proven to be good. Why wouldn’t all human beings take all of them (or some of them) and ensure themselves against those diseases? Even if it didn’t prevent the disease completely, it would at least decrease the probability of severe consequences, according to clinical researches.


There is a trade-off, however. Injecting another vaccine means increasing entropy in the system. And high-entropy systems are prone to butterfly effect [1] — thus, to unexpected consequences.


Think of installing a new software on your Windows PC ten years ago. You install a software from a trusted publisher. Than you install another one. And one more. And all of the sudden the whole system crashed. Why? Turns out that some tiny component from the latest software piece does not work properly with the one already installed. And it’s not that those two component don’t comply in general, it’s only those specific versions of the components you’ve installed on you particular PC that cause the problem. Nobody knew that because there are billions of possible combinations of versions and set-ups. It’s just not feasible to test it all, even if you’re Microsoft. High-entropy systems prone to butterfly effect.


Of course vaccines are not software pieces. They are tested much more rigorously by highly intelligent people before they become available to the public. But human bodies are not computer operating systems either. They are much more complicated, if not complex. Even now there are lots of unknowns and white spaces. And the more we know — the more there is to know.


Besides that, testing different combinations of vaccines is much more expensive, if feasible at all. Even with a tiny chances of something going wrong, with every additional vaccine injected chances increases much faster than one would expect.


Let’s imagine there is a 0.01% chance that any two vaccines are not compliable. That is, if a person injects both vaccines there is a 0.01% chance that it would cause unexpected consequences. What’s the probability of unexpected consequences if a person injects 10 different vaccines instead of 2? It’s 0.4% now (40 times higher). And with 20 different vaccines it’s almost 2% (200 times higher). 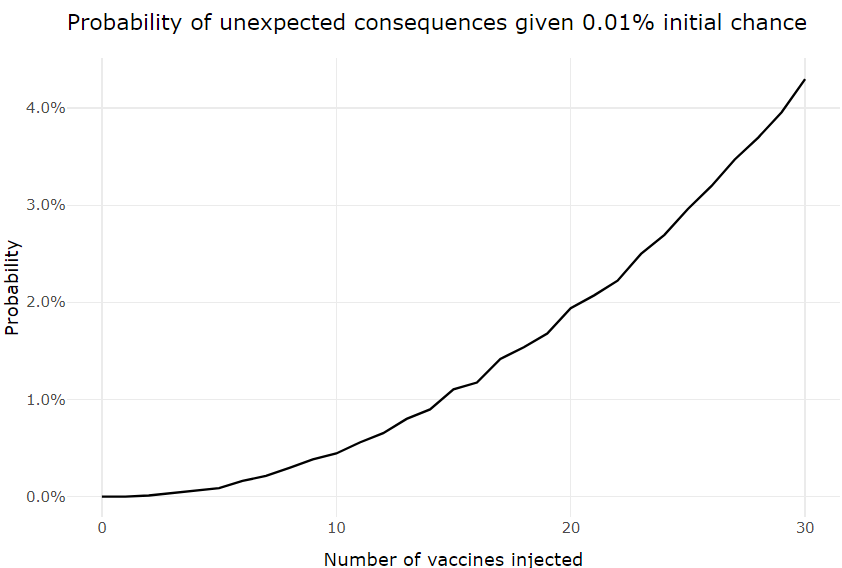 The initial 0.01% chance is of course totally made up (just like the number of vaccines injected). But the point here is that probability compounds much faster than linearly [2]. More vaccines means much, much higher chance of something going wrong.


Now, I wouldn’t consider myself a die-hard anti-vaccinator. I’m vaccinated against COVID-19, for example. But even with all the panic going on back than, I was rather reluctant to inject the vaccine. My primary motivation was not health-related, but rather external incentives, such as ability to travel. And I was aware it was a trade-off, not a free lunch. High-entropy systems are prone to butterfly effect.

[1] Butterfly effect — a small change in one state of system can result in large differences in a later state https://en.wikipedia.org/wiki/Butterfly_effect

[2] Birthday paradox — the probability of a shared birthday exceeds 50% in a group of only 23 people https://en.wikipedia.org/wiki/Birthday_problem. Same simulation is applied to vaccination problem above.